Witty Pi 2 can define complex ON/OFF sequence for your Raspberry Pi. Thanks to the schedule script, you can keep your Raspberry Pi in OFF state, and turn it on only when necessary. By doing so you are saving a lot of energy, which is perfect for solar/battery powered system.
In this tutorial, I will show you how to build a solar powered time lapse camera with Witty Pi 2. The required materials are shown in the picture below:

Different model of Raspberry Pi will draw different current. If you are not sure about the difference, you can check out this comparison on Raspi.tv.
The weather and the location you place the whole system will determine how long (in average) your solar panel can efficiently work everyday. It should generate enough mAh to support running the whole system for a day.

Most power banks in the market have a feature that they will turn themselves off when the load doesn’t draw enough current. This feature is useful since it can save your power, but in our case it becomes kind of annoying: when Witty Pi 2  is in standby state, it draws too small current (~1mA), and most of power banks will shutdown automatically. As a result, Witty Pi 2 can not get powered when it tries to turn on your Raspberry Pi, what a shame! The reason that I use Voltaic’s V15 power bank is that, it has an “Always On” mode. Just hold its power button for 6 seconds and it will enter this mode and will never turn off the power bank, while only consume very small current (~3mA) from the battery.
What if you want to use other power banks? How to avoid the auto power cut? The answer is “pulsing dummy load”, which is a new feature in Witty Pi 2. The idea is to use a resistor as dummy load, to draw enough current, to cheat the current monitor in power bank. Most power banks need ~80 mA to keep themselves alive. If you use a resistor to consistently draw 80mA current, it consumes 80mAh per hour (1920 mAh per day). In order to save the energy, you don’t have to keep the resistor connected, instead you connect it with a fixed interval, hence the actual current in average will go down. Witty Pi 2 has such a pulsing dummy load built-in, and you just need to configure the blue jumper to turn it on: 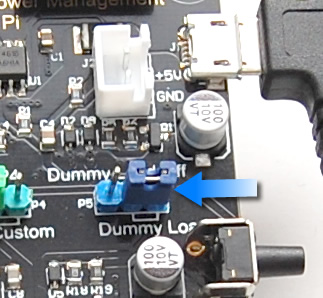 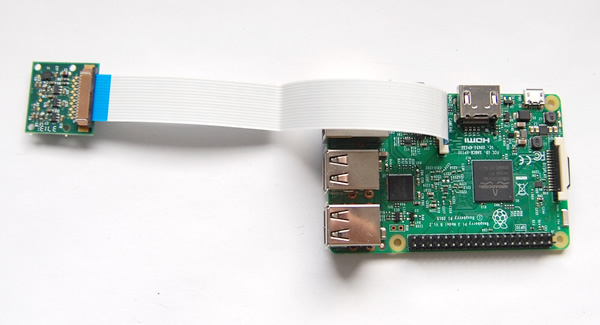 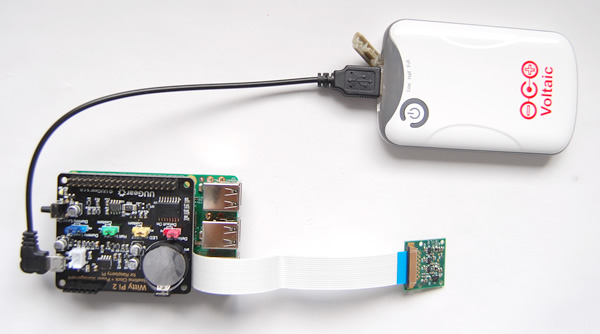 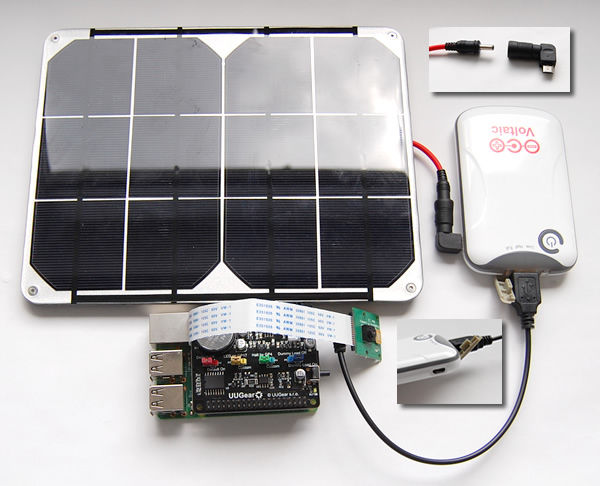 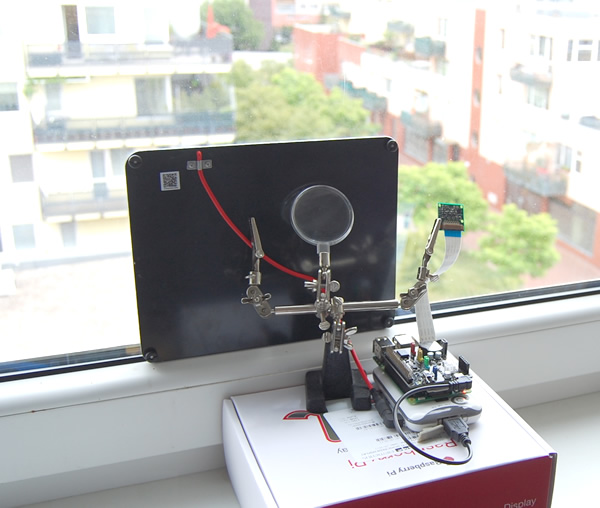 First you need to make sure you have installed the software for Witty Pi 2. Please follow the “Software Installation” chapter in the user manual.
You will need to write a simple script that can take a picture and correctly shutdown your Raspberry Pi. This script will be invoked by the software of Witty Pi 2.
Let’s create a directory in the home directory to store the new script file and pictures.

This script calls “raspistill” command to take the picture, and save it with the date time as file name. Then it pull down GPIO-4 to notify Witty Pi 2 to shutdown your Raspberry Pi.
Please notice the absolute paths for jpg file and raspistill command, they are necessary since the script will be executed as root user.
Here you can see the recommended approach to shutdown Raspberry Pi in your own script: gpio -g mode 4 out. This command will set GPIO-4 pin to output mode, as a result the pin will go to LOW state automatically, so the following “gpio -g write 4 0” command is optional.
You also need to make this script executable, by calling this command:

You can schedule the startup time with wildcard (??), so it will get repeated automatically.
After running “sudo ./wittyPi.sh”, you select the 5th item, and then input “?? ??:00:00”,  the result looks like this:

The “WAIT” syntax will tell Witty Pi 2 to skip scheduling the shutdown at the end of the ON state, so it will not try to shutdown your Raspberry Pi automatically (the run.sh script will).
To use this schedule script, you need to choose it when running wittyPi.sh, by selecting the 6th item (Choose schedule script) and pick the schedule script you just created.
Using schedule script is a little bit complex than specifying the startup time, but the advantage is that it can support more complex scenarios. You can wake up your Raspberry Pi at any moment in the day, you can even skip the weekend etc.

Have you considered that, after the deployment you hardly have a chance to login your Raspberry Pi any more? Every time after your Raspberry is turned on, it immediately takes a picture and then shuts itself down, and the entire process only lasts about 30 seconds! Are you really locked out now? Do you have to remake your SD card to access your Raspberry Pi?
Fortunately we can disable the shutdown on hardware level. Just use a Dupoint wire to connect GPIO-4 and 3.3V pins, hence GPIO-4 is strongly pulled up and the “run.sh” can not actually pull it down any more. By doing so you can still login your Raspberry Pi and do whatever you want. 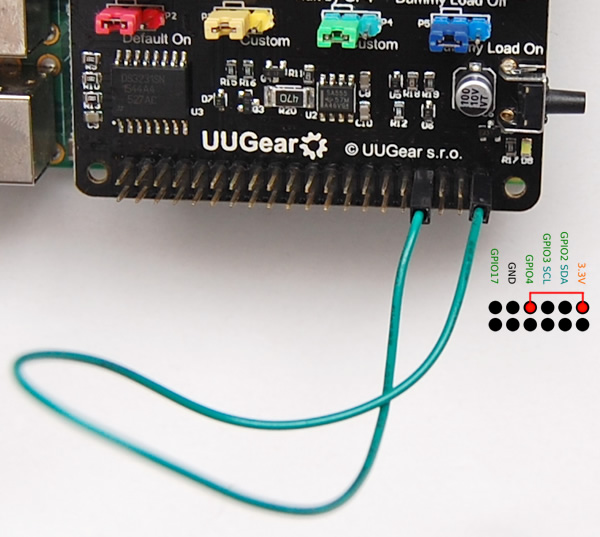 Be careful! The GPIO-4 is just next to the GND pin, make sure not to connect 3.3V with GND by mistake! I actually did that once, and thanks to the poly-fuse on Witty Pi 2, nothing really bad happened, and Raspberry Pi can still boot normally after removing the wire.
Remarks: you need to confirm your Witty Pi works normally before using this trick. If your Raspberry Pi’s serial port is not properly configured, i.e. TXD pin is low and GPIO-4 is shorted to GND, connecting GPIO-4 to 3.3V can lead to serious consequence and D2 will be heated and even burn up!
After login your Raspberry Pi with this trick, if  you unplug the Dupoint wire, your Raspberry Pi may shutdown immediately as the GPIO-4 pin has been set to LOW via software.

It is indeed a time lapse camera now, you can let it take photos and later use the trick above to login your Raspberry Pi and copy those pictures to your USB disk, or you can download them via SFTP protocol. It is quite useful already, but we can make it even better.
The Raspberry Pi I use here is a Raspberry Pi 3, which has built-in WIFI. When it is turned ON it will automatically connected to my WIFI. This means it is connected to the Internet when it is working. So if we could let the run.sh script to send us the new photo via Email, that would be fantastic!
You will need to install these three packages to send Email in BASH script:

The latter two packages are required to support TLS when communicating with email server. After the installation, you can type “sendemail” in the console to see all supported parameters. Here I give you an example for sending email with file attchament via Gmail server:
sendemail -o tls=yes -f YourEmail@gmail.com -t RecevierEmail@domain.com -s smtp.gmail.com:587 -xu YourEmail@gmail.com -xp YOURPASSWORD -u “Time Lapse Camera Email” -m “I am still alive!” -a FILEPATH
You need to replace the sender/receiver email address, your password and the file path with the real values. After running this command in your console, it will send you the email with file attached. Now you can integrate it into the “run.sh” script:

I let the script wait for 3 sends after the email is sent, it may not be necessary and I just want to be safe.
If you are using other Raspberry Pi models, you can simple connect a WIFI dongle to it to get the same result.